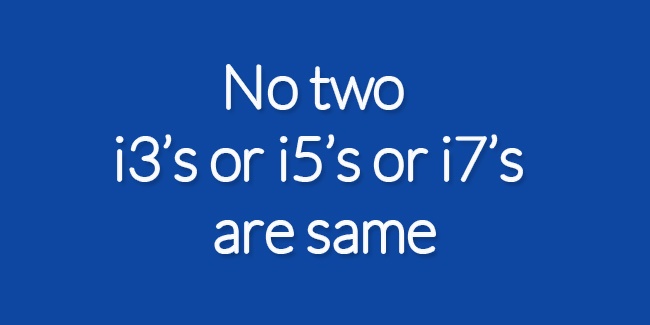 Central Processing Units are the core components that decide the performance of a computer. In olden days their naming systems used to be simple. Pentium 4 is the successor of Pentium 3 and they were all just numbers which everyone could understand but starting with the Core i3, i5 and the i7 Series, Intel was acting a little different.

It stopped increasing the visible count but rather it started incrementing the generations. I don’t know about other countries but here in India people aren’t realizing the fact that no two i3’s are the same. They might be of the same clock speed but they are definitely not the same until unless they have the same model number.

If you’re buying a desktop then go with non variable appended versions like i5-4570 but not i5-4570s.

Ok, the generation is fine but which variant to choose?

We have many options other than i3, i5 and i7 but these 3 are preferred for general purpose use.

If you’re a media producer or a gamer go pick up the i7. The best Intel could offer for home use. All desktop i7’s are quad core with hyper threading.

If it is for a mid level gaming and you’re a media producer then go with an i5. They perfectly balance the high end i7 as well as the i3. They are usually quad core processors without hyper threading and in a budget range.

All the processors discussed here belong to home use there are also Xeon processors which are server grade processors but better stay off them because they are intended to do something else. If you want a highly multi threaded processor for rendering then Xeons are the best.

Buying a video card is even tricky but I’ll talk about that in future posts.